You are here:  Towns -> Places to Visit in Cumbria -> Allonby

Things to do in Allonby, Cumbria 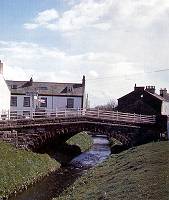 The attractive small village of Allonby on the Solway Coast, lies between Silloth and Maryport. Allonby has a beautiful shingle and sand beach, which has received an award for its cleanliness and safety. Between the beach and the village, is a stretch of land where the well known Allonby ponies roam free. The once thriving weavers of Allonby, used these greens to lay their cloth out in the sun, one area is still known as Bleach Green.

Allonby's sailing connections also extend to smuggling and ship breaking, where hulks were purchased and brought to Allonby by a tug to be broken up on the beach. The largest ship took two years to break up. Allonby's associations with the smuggling of contraband are recognised in the village's inclusion in the Smuggler's Route trail.

Among Allonby's interesting buildings are Christ Church which was

originally a Chapel of Ease, consecrated in 1745, it was extended a hundred years later to its present size. Inside the church is a tablet to Allonby's most famous son Captain Joseph Huddart (1741-1816), who was educated here by the first vicar of Allonby when the chapel doubled as the local school. Huddart voyaged with the east India Company to China and India, and contributed to the improvement of harbour facilities at Maryport, Whitehaven, Swansea, Dublin and Boston.

The Reading Room was built by Allonby's Quakers, in 1862 on the site of the weaving sheds, a factory school and the old tithe barn, is reminiscent of railway architecture and originally had a tower and clock.

Visitors to Allonby will find sports and leisure pursuits to suit all ages. The Spring Lea Leisure Centre has facilities for all the family and the beaches and

greens provide endless opportunities to enjoy the wide-open spaces. For walkers, both the smuggler's route and the Cumbrian Coastal Way pass through Allonby. You may enjoy a pony ride on the sea-front , or alternatively Allonby Bay offers exciting opportunities for windsurfing.

Just south of Allonby are Milefortlet 21 and the Saltpans of Crosscanonby which are well worth a visit. For nearly 700 years, salt was made from seawater along the Cumbrian coast, and the Crosscanonby site is a remarkably well-preserved example of this tradition.

Milefortlet 21, the first total excavation of a milefortlet, and a designated World Heritage Site, reveals a wealth of information about the life-style of Roman troops in Britain. One of a chain of evenly spaced mileforts, Milefortlet 21 was part of a system of defences, including Hadrian's Wall, developed to protect this far-flung corner of the Roman Empire.

Days Out in Allonby

Places to Visit near Allonby