You are here:  Towns -> Places to Visit in North Wales -> Abergele

Things to do in Abergele, North Wales 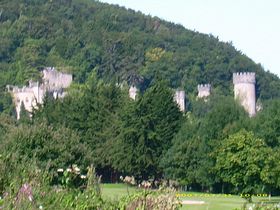 The town, which used to be a Roman trading port, is named after the river Gele which runs through it - and the word "Aber" in Welsh means estuary.

The history of the Abergele area goes back further than Roman times - there are two Iron Age hill forts at Castell Cawr.

Abergele boasts around 10,000 residents, many of whom still speak the Welsh language and are very proud of their Welsh heritage. The town is an excellent base for exploring the beautiful North Wales coast.

It is situated between the livelier resorts of Rhyl and Colwyn Bay with their amusement parks. The quieter towns of Llandudno and Conwy are also close by.

Abergele is home to the once-magnificent Gwyych Castle, a 19th century folly built on the site of a 12th century Norman Castle. From a distance, the ruined shell still makes an impressive sight and it has the beautiful Parkland Golf Course in its grounds.

Beyond the town itself are scenic wooded hillsides with many caves which are home to rare lesser horseshoe bats, among other wildlife. The best views of this lovely windswept coastline are from Cefn-yr-Ogof and the nearby Tower Hill with its 400-year old watchtower.

Those looking for higher peaks to climb will enjoy scaling Moelfre Isaf which stands 1038 feet above sea level, to the south of Abergele. Other activities in the area include fishing, horse-riding, mountain biking and beach combing.

The town itself has plenty of amenities including a supermarket, a cinema, Post Office, shopping centres, pubs, clubs, restaurants and a golf course.

St Michael's Parish Church is built on the site of an earlier Celtic monastery. A curious tombstone can be seen in the churchyard which states "Here lieth a man who had his dwelling three miles to the north". As that spot is now 2.5 miles out to sea, it seems that the Abergele coastline has considerably eroded over the centuries!

Other points of interest are the traditional lynch gate entrance and a penitential stone. There is also a memorial in the churchyard to the 33 people who died in the Abergele Train Disaster in 1868.

The Pensarn Beach at Abergele is well known for its 2 miles of soft white sand, lapped by the Irish Sea. It is the ideal beach for families to enjoy the safe bathing available here. A walk along the beach will reveal spectacular coastal views against the distant mountain backdrop.

The hills around Abergele seem to have been made for walkers. There are many paths for peaceful rambles to suit all ages and abilities amidst this stunning scenery.

Abergele has a local railway station and trips along the scenic coast can be enjoyed by train. Visits can be made to Rhuddlan Castle at Rhyl and Beaumaris Castle on the Isle of Anglesey.

A visit to what are reputedly some of the finest gardens in the world at Bodnant should definitely not be missed. Closer to Abergele, the small towns of Llanddulas and Old Colwyn are also worth a visit.

Days Out in Abergele

Places to Visit near Abergele