You are here:  Attractions -> Things to Do in Greater London -> Westminster Abbey 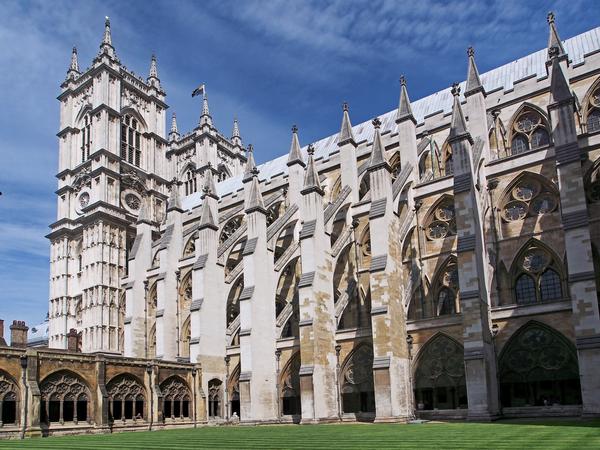 Westminster Abbey is an exciting place to visit for anyone interested in British History.  Almost all Britain's kings and queens since William the Conqueror have been crowned here, and many are buried at the Abbey too.

Officially known as the Collegiate Church of St. Peter in Westminster, Edward the Confessor had the abbey built in the 11th century. By the mid 13th century Henry III began re building it in the French Gothic style, in honour of Edward.

Additions were made over the centuries; one of the most important was the Lady Chapel built by Henry VII, now named after him. During the early part of the 18th century, Nicholas Hawksmoor designed the Gothic style towers for the west front. 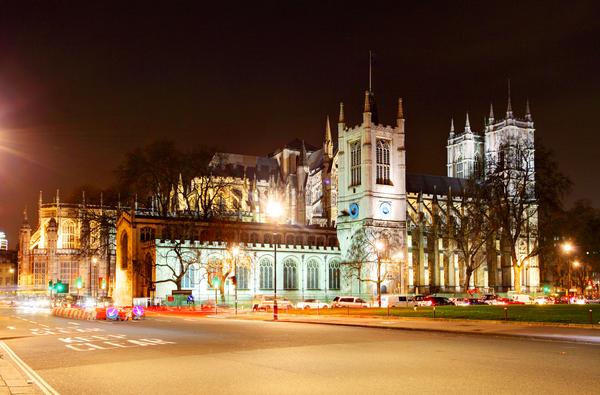 Above the west door, statues have been added to the niches representing twentieth century martyrs. Westminster Abbey is full of memorials, plaques, reliefs and statuary all commemorating famous and honoured citizens, although not all are buried here.

The Nave has massive flying buttresses which were new technology in the fourteenth century, allowing its magnificent stone vaulted roof and gilded bosses to soar to one hundred and one feet, the highest nave in England.

The area is flooded with light from the stained glass west window, designed by James Thornhill, constructed in 1735. 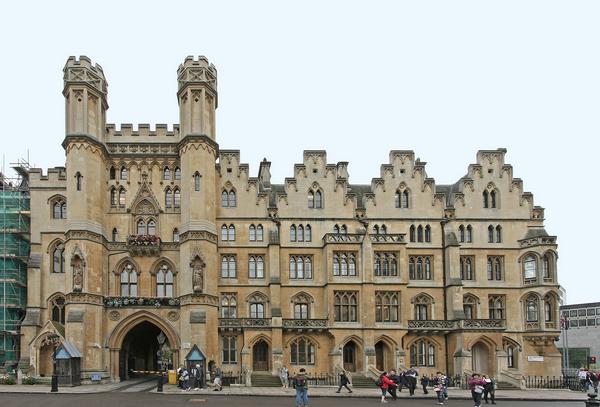 Below this window, surrounded by red poppies is the grave of the Unknown Warrior, commemorating thousands killed in the 1914-18 War, who have no grave.

Nearby is the floor plaque dedicated to Sir Winston Churchill, buried in his family plot at Bladon, near Blenheim Palace.

The Choir is where twenty-two boys and twelve lay vicars (as the men of the choir are known) sing daily services. Orlando Gibbons and Henry Purcell were organists at the abbey. 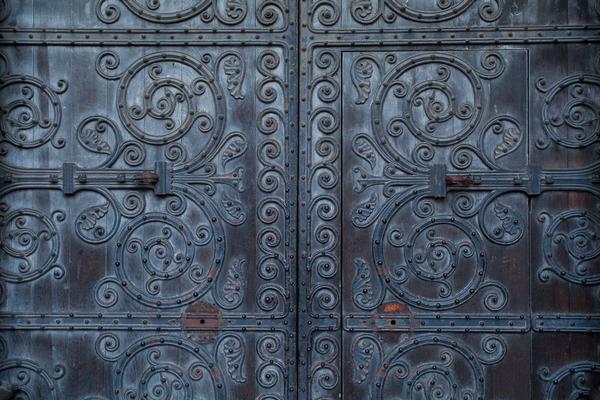 The Sanctuary is where coronations take place.  Behind the High Altar is the reredos, with a mosaic portraying the Last Supper - both date from 1867 and were designed by Sir Gilbert Scott.

On the altar are a pair of candlesticks bought with money left to the abbey by Sarah Hughes, a serving maid in the 17th century.

The Cosmati floor mosaic, constructed in the thirteenth century by Italian craftsmen, portraying the universe, is made up of Purbeck marble, green and red porphyry and glass, and is considered a precious work of art, one of the abbey's great treasures.

The shrine of Edward the Confessor, lies in the chapel east of the sanctuary, the most venerated part of the abbey. The stone screen, circa 15th century on the west side, is carved with scenes from the life of the saint, who was canonised in the 12th century. 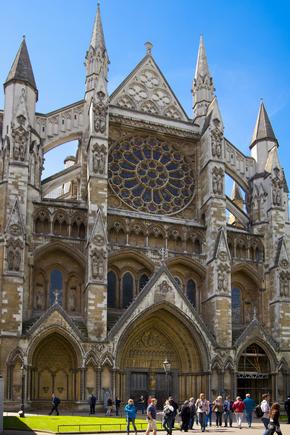 The abbey has seen the coronation of every British monarch since the 13th Century, except Edward V and Edward VIII.

The Coronation Chair of Edward I circa 1300 can be seen in this part of the abbey.

Used at every coronation since 1308, the throne was made to incorporate the Scottish coronation stone, known as the Stone of Scone, which Edward removed to England in 1296.

It remained in Westminster Abbey for the next seven hundred years, until its return to Edinburgh Castle in 1996.

Henry VII's Chapel or the Lady Chapel was completed in 1519. A pair of fine bronze gates displaying Tudor badges stand at the entrance.

The main nave is a remarkable piece of architecture in the English Perpendicular style.

The elaborate carved vaulting, gilded pendants and statues of saints are set high above the choir stalls, beneath the seats of the stalls are beautifully carved misericords. 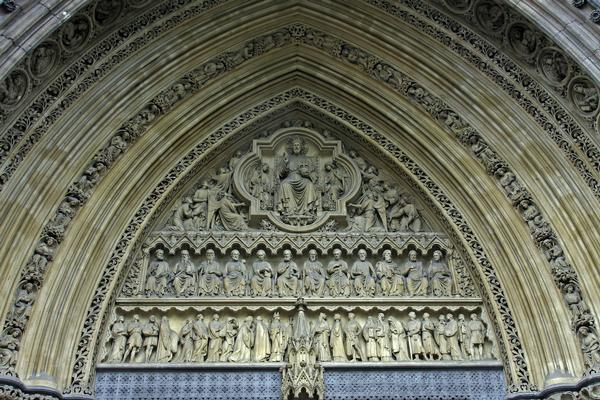 The chapel is decorated with the banners of the Knights of the order of the Bath, to whom the chapel was dedicated.

In the north aisle, is the tomb of Queen Elizabeth I; it is interesting to note that her Catholic half sister Queen Mary is also buried here.

Some people believe that an urn designed by Sir Christopher Wren and set into the wall, contains the bones of the Princes murdered in the tower of London, Edward V and his younger brother Richard, although this has never been proved. 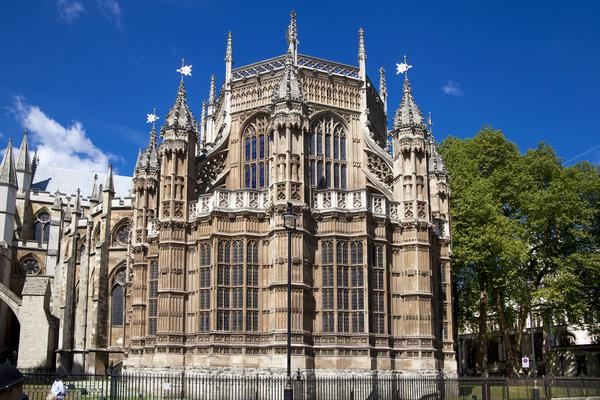 Behind the altar is the black marble sarcophagus of Henry VII and his wife, Elizabeth of York, their gilded effigies modelled from their death masks.

In this chapel is the red robed effigy of James I's grandmother and the elaborate tomb of his mother Mary Queen of Scots. James himself is buried beside Henry VII.

Below the altar, commemorated by simple plaques lie William and Mary, Queen Anne and Charles II.

At the east end of the chapel, is the colourful memorial window showing the crests of the 68 Fighter Squadrons, which took part in the Battle of Britain. 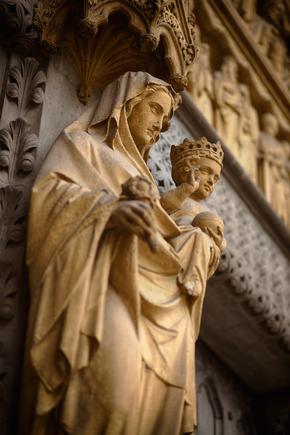 The South Transept and Poets Corner is dominated by the magnificent rose window.

Below it are two censing angels, the finest carvings in the abbey dating from the 13th century.

From the same period are two wall paintings, depicting Christ showing his wounds to Doubting Thomas and St. Christopher.

The first person to be buried in Poet's Corner was Geoffrey Chaucer in 1400, who was clerk of works to the Palace of Westminster.

There are memorials to John Dryden, Edmund Spencer, Dr. Samuel Johnson, Robert Browning and Charles Dickens to name but a few.

Many illustrious people are commemorated in Poet's Corner but are buried elsewhere, such as William Shakespeare, John Milton, Wordsworth, Keats and Shelly, the Bronte sisters and Jane Austin. 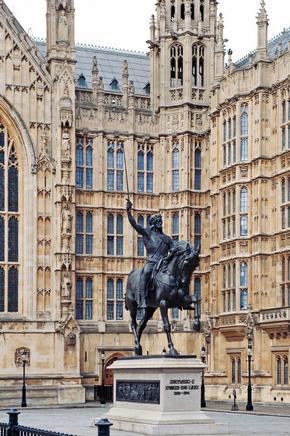 Not all who rest here are poets and authors, there are several of the abbey's former Deans and Canons, the musician Handel, the actor David Garrick, the last to be buried here was Sir Laurence Olivier.

The cloisters date from the 13-15th centuries. Originally they would have been glazed and heated by braziers.

They would have been used by the monks of the original church for meditation, places of study and for taking exercise, also for access to the refectory and the Chapter House.

East of the cloisters is the Pyx Chamber, the Sacristy of Edward the Confessor's church, later used as the royal treasury. Today the chamber is used to show the abbey's plate.

The Undercroft is now a museum, containing many interesting artefacts from the abbey's history.

Days Out near Westminster Abbey

Places to Visit near Westminster Abbey